Finland is a tranquil country. Many in our diverse group of journalists are from cities buzzing with traffic and life. On Helsinki’s streets, rush hour is almost non-existent and on a relaxed Sunday afternoon it is so quiet that you could almost hear a pin drop at the other end of the city. On many occasions during our two weeks here, we have felt like our loud conversations and laughing were disturbing the public peace. 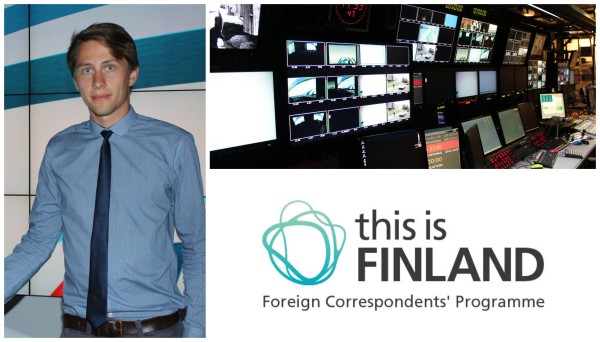 Finland’s national broadcaster Yle is no exception to the country’s calm and relaxed atmosphere. As Marcus Ziemann, a science reporter and Yle veteran, shows us around the corporation’s main complex in northern Helsinki, nobody seems to be worried about an upcoming deadline or going on air shortly. The main newsroom – Marcus calls it the “nerve centre” – could be a medium-sized accounting firm working on next year’s tax return. “It looks quite different when something big happens and everybody switches to crisis mode,” he says, “any regular day like today is only a preparation for such situations.”

Yle was founded in 1926 as a public service broadcaster and it is owned by the Finnish State. Its organisational structure was largely modelled on the BBC. While the resemblance with its UK counterpart is obvious in every corner of the building, it seems too easy to present Yle as a slow and outsized media organisation from the past, like some people in Finland do.

While media around the world struggle with the transition to monetising digital content – Finnish Sanoma just announced  a new cost-cutting programme, likely to result in a maximum of 280 redundancies – Yle has managed to fly under the radar and provide innovative solutions in the digital realm. A team of journalists and coders at Yle Plus work on long features, animations and interactive content. The company’s R&D department, on the other hand, focuses on giving users the possibility to personalise the content they see on their devices. With Yle publishing more than 250 stories every day, you need to be able to choose what you are interested in, they say. One app for all Yle users will not be good enough to achieve that.

And on my second day, I do get my shot of adrenaline working for Yle’s English service. “Your TV report needs to be ready in 20 minutes, you’re going on air with the radio news just after that,” Sam Kingsley from Yle News tells me. There is the deadline pressure we journalists love at YLE after all. Maybe Finnish journalists are simply more relaxed about it.

Michael Ertl comes from Germany, and is employed by the BBC World Service in London. “Knowing a country well is the key to balanced, fair and objective journalism. From my daily work as a broadcast journalist and from previous reporting trips abroad, I have come to understand that no amount of research can replace experiencing a country first-hand.” View all posts by Michael - United Kingdom