Finland and Indonesia are technically two very different worlds. To reach Finland, I had to survive a 12-hour flight. It seems as if there was a huge gap between Asia and Europe.

But, one says that music is a universal language and I believe it. Collaboration between Asia and Europe in music could be the key to shortening the gap between these two continents!

That’s why I was very happy to attend a Europe-Asia Roundtable Sessions (EARS) in Helsinki, Finland. EARS is the premiere creative industry conference that supports international collaboration by showcasing the latest trends from Asia and offering the chance to meet people behind them. 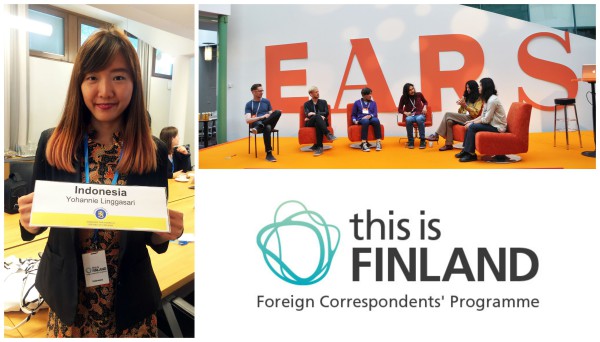 One of the reasons that also made me happy to attend this event was that I found out that there was an Indonesian speaker in this event: Indra Ameng, the program director of Ruangrupa (a non-profit organization that strives to support the progress of art ideas within an urban context and the larger scope of culture).

Indra Ameng is also an influential character in Jakarta’s current alternative art and music scene. He is the manager of indie pop band White Shoes & The Couples Company that performed at Modern Sky Festival this year.

Along with Indra, there were also Wannarit Pongprayoon from Thailand, Kikagaku Moyo from Japan, and Philipp Grefer from Fake Music Media. The discussion was about music scenes across Asia.

The conclusion was clear: Asian countries as a market for music have their own uniqueness and that’s why the approach cannot be generalized. For example, Pongprayoon explained that in Thailand, people tend to refuse to spend money for a concert because there are many free concerts.

On the contrary, in Japan, ticket prices for concerts are really high. Kikagaku Moyo explained that the price is about 20-30 euros for a local band. That’s why young people cannot afford to buy tickets.

Nevertheless, Indra said that promotion through social media and music festivals could be so helpful to reach European markets. “Be different and put your own colour in your music. That’s the key to attract people,” he said.

White Shoes & The Couples Company, for instance, has twice been invited to perform in Helsinki. Not only in Finland, this band has also travelled to France, Germany, Sweden, Denmark, Italy, and The Netherland to promote itself.

“Indonesia has a very big population so we don’t face any difficulties to create a market. People will watch. But some of the European countries don’t have big populations, so we must be really unique to make people listen to us,” said Indra.

In the future, I think events like EARS should be held more frequently. At least, for a few hours or so  ̶  the gap between Asia and Europe would become smaller. Collaboration between the two continents through music and other creative industries is definitely needed!

Yohannie Linggasari works at CNN Indonesia, where she focuses on human rights, education and topics related to gender. “Finland is one of the countries I admire for gender equality: it became the first country in the world to give women full political rights.” View all posts by Yohannie - Indonesia

One thought on “When Europe and Asia became so close”