With a bottle of fine French wine at hand and the refreshing breeze of the Aura river on that particularly fresh summer-ish day tingling my face, it felt like my day to Finland’s oldest city, Turku, couldn’t get any better. I had arrived a couple of hours earlier with the father of Finnish family which is hosting me for the weekend. He had planned to run the marathon that day while I opted for a day of sightseeing and evidently, wine-drinking.

It was at that picturesque, almost perfect moment of the day where my wine buzz was at just the right level when intrusive chanting came barging into my thoughts. As I got up to investigate what could possibly be ruining the tranquility of such a nice day, I quickly remembered that my Finnish dad (yes, that’s what I’m calling him) had casually mentioned that Turku was to witness a Neo-Nazi protest that day.

Driven by my journalistic curiosity, and burning intrigue to see how the protestors (read: fascists) would react to my brown skin, I rushed over to the cathedral square where the protest was taking place, and there they were looking like a militia waiting for the attack order. I reached in my bag and quickly grabbed my Finnish press card and held it up as I made my way through the protestors, who were giving me the most hostile glimpses I had experienced ever since I landed in this exceedingly peaceful country more than two weeks ago. 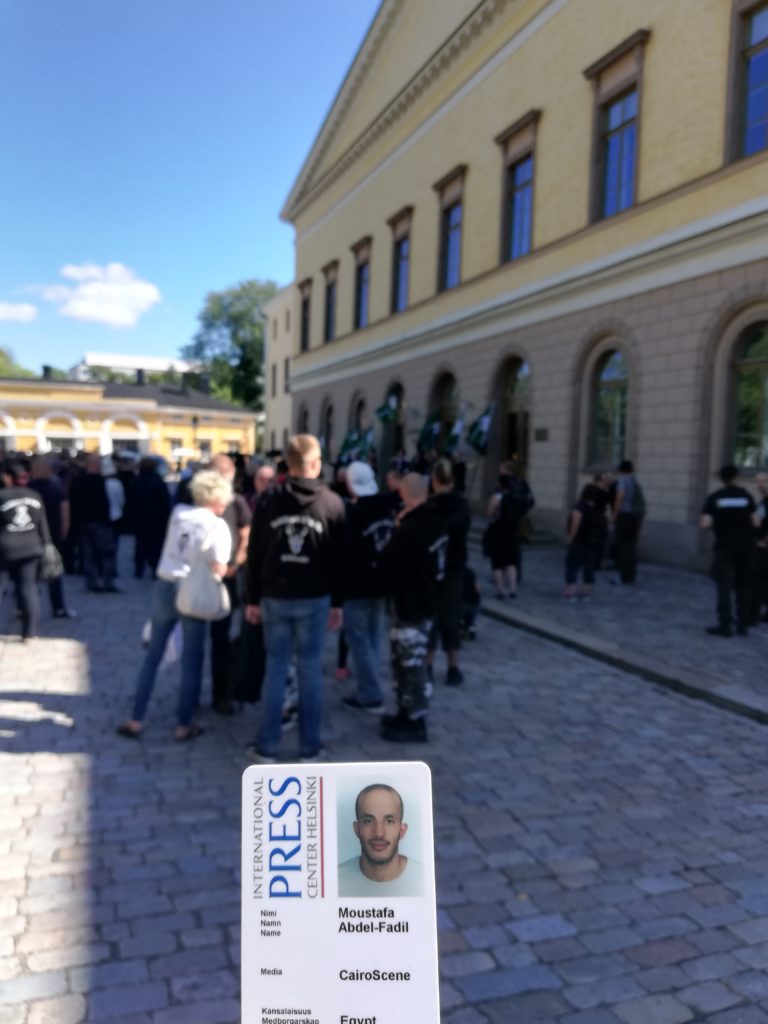 “They can’t harm you,” I whispered to myself as their glances got even more aggressive. There were police all around the square, which made me feel safe and secure. I kept shooting many videos from every angle, recording their speeches which I naturally couldn’t even understand, except for the frequent use of the words ‘Muslims’, ‘Islam’, and ‘Terrorism’. The Hate Rally lasted about an hour, during which the worst that had happened was still limited to hostile looks and snarks.

Towards the end of the protest, as I was pulling out my camera again to film them up close, two of them suddenly attacked. Taken aback and startled, I quickly took a few steps back while raising my press card as one of them kept screaming at me GO AWAY. To the nearest cop I retreated, and was advised to exit the square for my safety. I crossed the street back to the banks of the river feeling shaken, exposed and threatened, a feeling I only felt once before during some violent episodes at Egypt’s January 25th revolution.

Before getting too much in my head, I was stopped by a group of young Finns who felt the need to personally apologise to me for what had happened, and assure me that I’m safe and free to roam as I pleased, and some suggested I go to the police or get in touch with the press, which is when I realised the crucial difference between what I was feeling in Turku and what I had felt back in Cairo in 2011.

Here, in Finland, I had the system on my side. I could have gone to the police, and they would have taken me seriously. The laws protect my freedom as an individual and a journalist, and they are actually enforced as they are written. That one fascist bigot represents no one but himself. I can’t control what people may think or believe towards me, or their preconceived hate to me because of how different I look or act or feel, not here and not back in Egypt. But unlike my country, which I love deeply, in Finland I wouldn’t have to second-guess if I was going to find enough support had I decided to file an official complaint or publicised my story through the media.

Some may hate Muslims here, and therefore feel the right to chase them away and terrorise them. Back home, some may hate women, copts, faggots, or anyone who doesn’t conform to the Muslim, hetero-normative norms of society, and therefor also give themselves the rights to enforce their version of what’s right and acceptable. Both are two faces of the same coin, however what matters at the end of the day is how the system works, and what tools do I have to protect myself.

Just knowing I have that many tools at my disposal (and also more wine) put me at ease for the rest of that afternoon. And despite the fact that I may never erase the utterly hateful look on that fascist’s face, as he was chasing me away, from my memory, I learnt that I can still be as colourful as I want to be in Finland without fear of repercussions, because at the end of the day, I can always count on the system to have my back.

Moustafa Daly is a journalist pursuing his dream to give a voice to the ones who are normally left unheard. Moustafa works as an Editor and Senior Writer at an English-speaking online magazine Cairo Scene. This magazine is known for covering controversial topics which are generally kept quiet in the Egyptian society. Instagram: @mous.daly View all posts by Moustafa - Egypt