At the entry of the classroom, there is a string of small tidy shoes. That gives a feeling that we are in a holy place. For those barefooted 7-year-old children, this ritual turns the school into a very significant place – even if they probably haven’t realized it yet.

We are at Viikki School, and so: that was true. Everything you have heard about Finnish schools is here, in this place that could be the-dream-school-of-French-politicians. 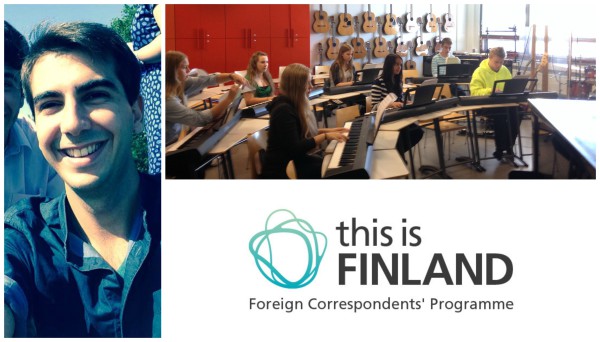 We also visited a maternity and child care center in Helsinki, and I think that it was quite impressive for people from different parts of the world except for the French whose country is very efficient in this area. However, on some points, Finnish schools are hugely different from the French. Here are 3 differences:

1. A public school with the means of a French private school

Modern buildings, clean corridors, high technologies in every classroom! It definitely looks like some French private schools. Here you will not find papers on the floor, chewing-gum in the lock or graffiti on the tables. You will find music classrooms with a dozen pianos and guitars. Poor French pupil with his plastic recorder!

It may sound cheesy for French people, but traditions are definitely essential for the Finns. With this framed group photo at the top of the stairs for instance – with all the staff, and not only the principal and the teachers as you can see in some French high schools.

But the more impressive thing is this incredible scene in the library. Something that I never thought I’ll see – except maybe in Hogwarts, the school of Harry Potter – painted portraits of all the principals since the creation of the school. By the way, there were 9 women and 2 men.

3. The question of religion

Religion is a touchy issue in France, especially at school, since France is a secular country. It accepts every religion but prohibits professing any religious affiliation when you are a pupil. This means that at school you can’t wear a veil, a kippa or a cross around your neck.

This is completely different in Finland. All pupils can wear what they want. The major difference is that there is a lot less diversity in Finnish classrooms than in French classrooms.

In France, there is also dispute about different foods served in the canteen. Should the school offer different menus based on the pupils’ religions? Should they have the choice between halal meal and kosher meal? In Finland, there is a vegetarian menu which seems to satisfy everyone. No controversies.

Erwan Morice is a journalist and a producer at BFM Business, a French national business TV and radio station. “I am a ‘gai-luron’, as the French say, which means that I am convivial. I am very happy to meet people from all around the world, who share my appetite for news and journalism.” View all posts by Erwan - France