Welcome to a Finnish summer cottage in Hyvinkää. Take off your shoes (as the Finns always do) and be ready to enjoy the summer sun, the smell of old wood, sauna, wonderful people, interesting conversations, starry nights and delicious food.

Being with a Finnish family for the weekend has been one of the best things of the Foreign Correspondents’ Programme so far. Jaakko Jokio, and Annukka and Henrik Lyra were wonderful hosts who helped me understand more about Finland. 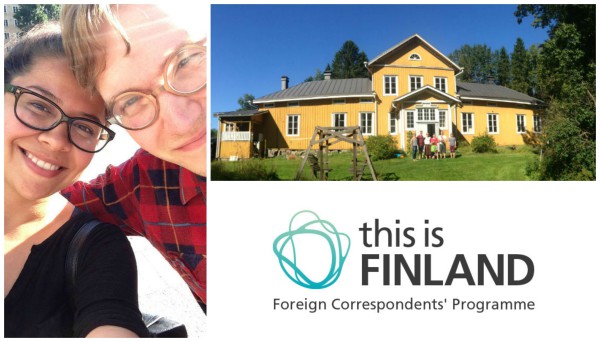 Jaakko – a 32-year-old sommelier – will get married to his boyfriend, Mika, next summer. Currently, Finland is the only Nordic country where gay marriage isn’t allowed, although same-sex couples have been able to register their partnerships since 2002.

In Finland, marriage is only between a man and a woman. For my Finnish hosts, this proves how conservative the country still is.

Good news: in November 2014, the Finnish Parliament voted to allow gender neutral marriage, prompted by a citizens’ initiative and in February 2015 President Sauli Niinistö signed it as law. Bad news:  in July 2015 an anti-gay petition created by the Association for True Marriage gathered enough signatures (more than 50,000) to force Parliament to debate a reversal of this law.

But Jaakko and Mika will get married. The wedding will take place in the huge villa they share with Annukka, Henrik, their little sons Onne and Martti, and two other couples.  Yes, it will be in the same cottage where they welcomed me during this weekend, a really old wooden house built for a Russian officer in the 19th century.

It was wonderful to see how these couples are investing time and money to renovate this beautiful place and make it warmer for living and welcoming friends.

Almost every summer cottage in Finland has its own sauna and this place was no exception. This time I went in with three wonderful Finnish women – Elli, Satu and Hanna, with whom I had great talks about gender equality, men and dating culture in our countries, while laughing and sweating as hell. This is the ultimate Finnish experience. If you come to Finland and you don’t try sauna, you haven’t been here. What a delicious feeling it is to get out of sauna, sit down on a bench and enjoy the fresh air, the evening sun and a cold beer. And the conversations, always the conversations!

Jaakko, Annukka and her mother Leena knew I love old churches, which is why they took me to one of the oldest wooden churches in Scandinavia, Vanha Kirkko, built in 1632. Simple, yet so amazing!

I truly believe there isn’t a better way to understand a country than through listening to its people. Thank you Finns for letting me know that Finland is no paradise and that you do have reasons to go out to the streets and organize protests. Last Saturday, 5,000 Finns took to the streets of Helsinki to protest against the Government’s planned austerity measures.

Mayra Zepeda works as a reporter, editor and community manager for a Mexican digital media news site. In addition, she has earlier experience as a radio journalist. Mayra is very interested in education, human rights and migration, and has a particular interest in Finland, which she has visited before. View all posts by Mayra - Mexico