As I set out to write this piece – just a few hours before deadline – as any respectable and most likely overworked journalist does, I stop to read a piece in The Guardian, on how Finland had managed to reduce homelessness, by making housing unconditional, as a necessary condition to start fixing all the other broken things in your life. Since the launch of the Housing First programme, in 2008, the number of long-term homeless people in Finland has fallen by more than 35%.

Very often, just a few days go by without me hearing or reading something that’s working in Finland, a problem the Finns managed to solve or a new world record they broke. Most often in the “happiness index” or some other ranking having to do with quality – of life or of air, to say the least – two areas where Romania is lacking waay behind. 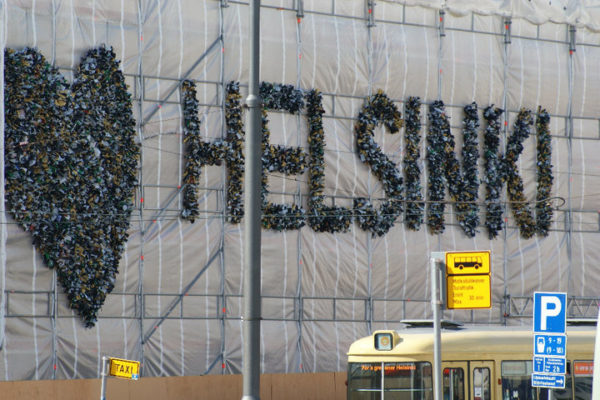 The photo you see I took in 2010, during my FCP experience and it’s been on my Facebook wall ever since. It’s a simple reminder of how they manage to turn even a building site in the city center into something memorable and, yes, instagramable. For me, Finland 2010 also holds my most vivid memory of what punctuality and respect for one another’s work look like. And not to mention sisu. I remember I was impressed on how well prepared all the very important people we met were, concerning our background, our schedule and focus of the programme. And how much effort they would put into answering extensively to our questions or pointing us to additional resource materials. It’s not an overstatement when I say that the way the FCP was run and what I’ve learned on this trip on the way Finns do their work has forever set a standard in my work as well.

I guess Finland is such a good reminder for the standards one should have – in the work they do, the life they live and, yes, of the air they breathe. It’s not at all a good time for me to leave the newsroom for a week right now, just before another 10-week long programme in the US, too soon after I’ve launched a project – an editorial beat on rural development, with a whole new team, events to run, budgets to manage and a funder to report to. At the same time, it probably is a very good time for me to leave the newsroom right now. Because reminders are always needed.

Sorana Stănescu is a participant of FCP 2010 an she’s a long-form magazine writer for the independent quarterly magazine Decât o Revistă (DoR), and a current affairs TV reporter. She was a senior journalist with the Romanian public television (TVR) for eight years. Since 2016 she’s been covering extensively the fields of education and social equality for DoR, and has been coordinating DoR Live, a series of live storytelling events. She has been a contributor to BBC TV’s flagship investigative programme Panorama and to several other British and Romanian media. In 2012 Sorana won the first prize in the Balkan Fellowship for Journalistic Excellence competition, with an investigation on the UK job restrictions. The same piece won the Reporting Europe Prize in 2013, an annual prize honouring excellence in English-language journalism, awarded by UACES – the academic association for Contemporary European Studies in the UK. Since the programme she has covered Finnish education system extensively in DoR. She says that Finland has become her go-to place when she wants to do research about best practices for stories related to energy, transport and environment. View all posts by Sorana - Romania