“Welcome to Yle, I am Miss World!” That is how we were greeted at Yleisradio Oy, Finland’s national public-broadcasting company. Miss World is called Elina Ravantti in real life. The nickname derives from her position as Head of World News and Current Affairs at Yle, where she oversees the production of 220 radio and TV news bulletins per day. Her editors work in Finnish, Swedish, Sami, English, Russian and Finnish sign language. Almost one third of Yle’s 3,000 employees work in the news department – an indicator of the company’s priorities. 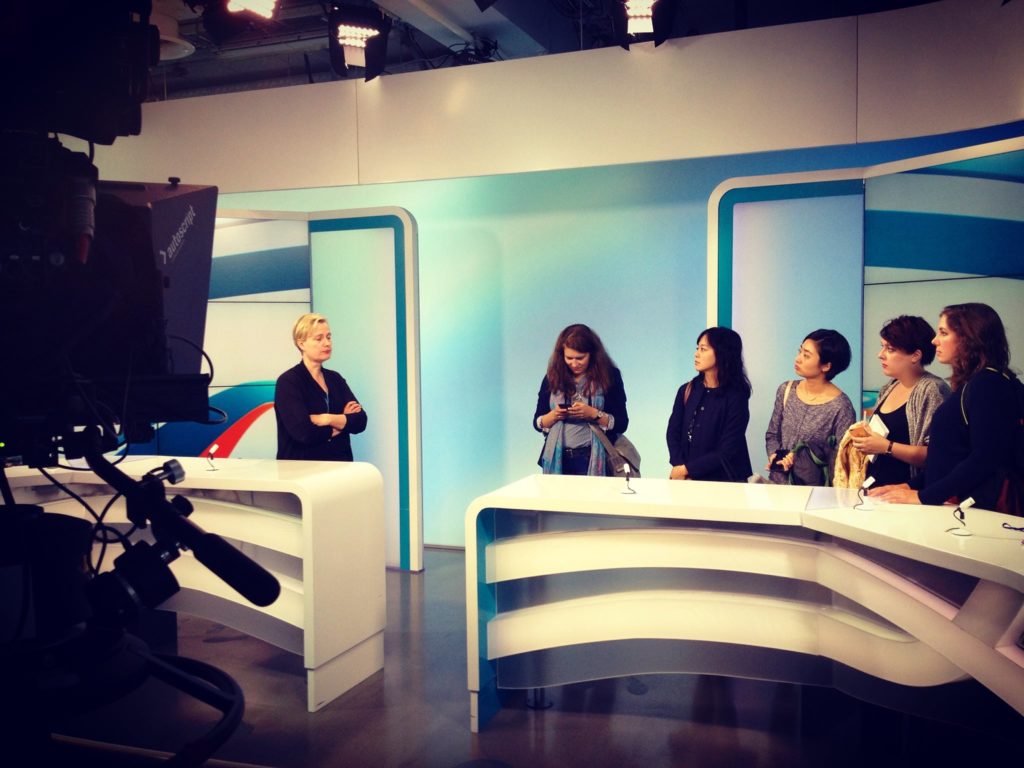 Over the last two years, Yle has undergone an intensive organisational transformation, which did not stop at the newsroom. “18 months ago, we changed the modus operandi. In order to increase efficiency, the editors carry much more responsibility now”, says Ravantti.

Furthermore, a Media Lab was established to foster digital innovation. “My job is to keep us ahead of the international competition”, states Mika Rahkonen, who leads the new division. His team’s objective is nothing less than to reinvent the news: “People are forming mobile habits right now. This is the time to experiment!”

As new devices, apps and social media come and go, Yle’s strategy is to develop services which are good enough to lure people away from external streams (like Facebook, for instance). While also still working on a new all-embracing social media concept, Rahkonen is particularly proud of the hyper-personalised news app he and his team have developed. “Yle Uutisvahti” lets its users choose which topics they want to be informed about, and at what intensity.

Rahkonen assures that despite the high level of personalisation, users would remain anonymous. Nevertheless, his team analyses the data thoroughly – and is, at times, taken by surprise: “We did not have a science department. Now we do, because science topics get very good rates.” (Another surprise: the “sex” tag is ranked as low as 119th.)

The efforts paid off: recently, a study by the Reuters Institute for the study of Journalism found that Yle, along with the BBC, were the top innovators in the European public broadcasting sphere.

Eva is a 26-year-old German journalist. She attended the Foreign Correspondents’ Programme in 2013. She has a strong presence in the social media. In 2013 she reported from Finland via her blog and Twitter, Instagram and Facebook accounts. Now she would like to take a step further and report live, via Snapchat and Periscope. She works as social media consultant and lecturer at Deutscher Journalistenschule, Hamburg Media School, Telekom, Allianz et al. Eva has strong experience in front of TV cameras as a host of a TV show for young adults, and she has been working a lot with video material in her blog. Schulz won an Young Journalist Award in 2014 and has been nominated for best online reporting in the “Deutscher Reporterpreis” competition. She is enthusiastic about questions regarding EU, Europe and the refugee situation from the Finnish perspective. She is also interested in Arctic policies and Helsinki’s plan to become a car-free city by 2015. “The Foreign Correspondents’ Programme sparked off my wanderlust. I have been to four continents and many different countries since then, but I honestly feel a particular warmth and sense of home when I think of Finland.” View all posts by Eva Schulz