White Shoes and The Couples Company is an Indonesian band, which performed at the Modern Sky Festival on 28-29 August in Helsinki. With their classical outfits and dancing styles, which take you back to the fifties, and the loud music mixing pop, jazz and funk music genres in one outstanding violent performance on the stage, the band grabbed the attention of hundreds of European and Asian music fans.

For me, the whole experience was completely different as it was my first time to watch a live show of an Indonesian or even an Asian band. I kept asking myself why most Egyptians and Arabs aren’t familiar with these remarkable Asian music talents! Why don’t we have such festivals that bring bands from around the globe and introduce their arts and culture to the public audience? 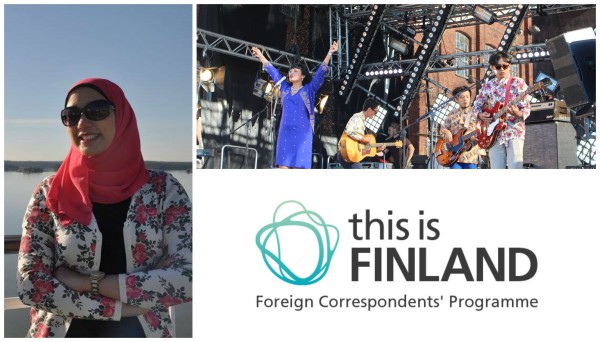 The Modern Sky Festival hosted bands and artists from 11 Asian and European countries, including Sweden, Norway, Finland, Malaysia, Indonesia, Thailand, Korea, Japan and many others, attracting more than 2000 viewers in a small shipyard area in Telakkakatu.

“What really distinguishes Modern Sky Festival from other festivals is that we focus not only on Nordic music but also on Asian music and outstanding Asian bands that aren’t known here at all,” says Jani Joenniemi, the local director of the festival. “We aim at bringing Asia a little bit closer by introducing a lot of new actors from here and there under our main theme ‘New Nordic meets New Asia’,” he added.

After White Shoes had finished their performance, a Finnish pop singer Ronya appeared on the stage with her stunning aura and presented a collection of her old and new songs, taking the audience onto another musical journey with a completely new taste. At 7 p.m., the Chinese Re-TROS band rocked the stage with their amazing music and urged the audience to dance and move.

Actually, this great combination of different shows made me ask about the process of selecting the bands and the main criteria behind such selection.

“The selection of the bands and artists who perform in the festival is mainly based on contacts, suggestions from friends, and the vision of the programming team members who exert a great effort to monitor the Asian artistic scene and select bands whose music styles will appeal more to the European audience,” Joenniemi explained.

“We’ve been looking for global music styles that the Finnish audience can relate to and whose context they can easily understand,” he added.

Although the main organizer of the event, Modern Sky, is a Chinese company, the festival doesn’t have future plans only to support, promote and refresh the Chinese music industry but also the whole Asian music scene.

“We thought that introducing a wider Asian music angle will be something new and fresh for our market here, especially because most international festivals are completely dominated by American and European actors and the Asian metropolitan presents a lot of global music that needs to be promoted internationally,” he added.

“Live music is a big chunk of the whole music industry in Finland and over the past months all Finnish festivals have attracted huge numbers of audiences and achieved a lot of success,” he concluded.

Although the Modern Sky wasn’t as big as the Flow Festival, I believe that it can play a great role in bridging the gap between the eastern and western cultures and music scenes and in promoting the concepts of mutual understanding between their people.

Rana Khaled Abo El Fotoh is a freelance journalist from Egypt. She covers topics related to arts and culture, and is very enthusiastic and motivated about journalism in general. “Finland means a lot to me. It is the least corrupted government in the world, and has one of the world’s best education systems. It is also the best place to raise a family – and the home country of my favourite heavy metal bands.” View all posts by Rana - Egypt