Before I came to Finland, what I knew was that the country has a strong capability of innovation. From Nokia to Angry Birds, Finland is best represented by ICT, the game industry, and arts and design.

But some people doubt this because as a result of the recent years of depression, the Russian crisis, and changes in its own economic structure, Finland’s economy has weakened. Now the question is posed: is Finland still the best place for innovation?

Fortunately, I found the answer during the FCP programme. Through talks with different people from different levels, I can see how proud the Finns are of their innovation abilities and how much the Government wants to encourage and support their creative peoples’ wishes. 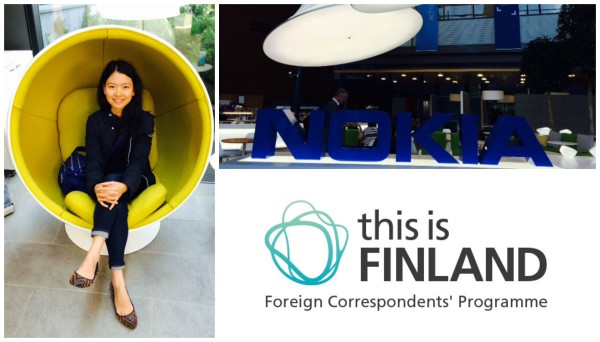 Nokia is not only a mobile phone icon but also an icon of Finland. But since the company sold its handset business to Microsoft, many people are concerned that it will collapse. This is far from true. Nokia people are now talking about “New Nokia”, which orients itself into three main business areas: networks, mapping services and technology. Nokia bought Alcatel-Lucent a few months ago. They form a stronger combination that will boost innovation. According to Brett Young, Senior Communications Manager at Nokia, the company is doing quite well with its 5G development and trying to standardize the frequency of the network. Nokia sold its core mapping business, the Here unit, to a German car maker group a few weeks ago, but Young said it would still be engaged in the car business.

Tekes is the Finnish Funding Agency for Technology and Innovation. But recent years’ budgets for Tekes have been cut dramatically. Kari Hiltunen, Director at Tekes, said the main challenge nowadays is not the shrinking budget, but where to invest. He said that most companies funded by Tekes are Finnish, but if the Government found some foreign companies that could also benefit Finland, then they would be funded as well. Tekes now has around EUR 500 million available for funding. It’s still a huge amount according to Hiltunen. “As the budget has been cut, the activities have focused on strategies and companies, for example SMEs and start-ups instead of big companies,” Mr Petri Peltonen, Director General of Enterprise and Innovation Department at the Ministry of Employment and the Economy said.

For Mr Peltonen, the next three big themes driving Finland to be an innovative destination are “BCD”: Bio economy, clean technology and digitalization. Finland has a natural advantage for bio-fuel thanks to the amount of forested area. As many papermaking companies are looking for ways to transform, the bio-industry is a good solution. Clean energy is also an important sector that the Government supports a lot. ZenRobotics, a waste treatment start-up company may be the best example. Founded in 2007, the company uses standard industrial robots just like those in Volkswagen factories. Using artificial intelligence technology, they are very efficient. Timo Taalas, CEO of ZenRobotics, said that their goal is to become a multi-billion company.

For big companies such as Kone, digitalization is the future. Entering in the Kone headquarters on the seaside in Espoo, I was impressed by two huge elevators. They are quiet and fast. When you use you badge to enter the elevator, you don’t need to press the floor number, because it memorizes your ID information and knows which floor you are going to when you swing your badge. “We’ve also developed new material to make elevators much lighter, it’s very energy efficient,” said Liisa Kivelä, Director of Communications at Kone.

Is Finland still the best place for innovation? There are many reasons to believe that it is. Over a hundred years, the country has invested huge amounts of money in people. Mr Peltonen is a strong believer in education and proud of the talents, R&D and “know-how” found in his country. “Although we are experiencing difficult times, we have a firm belief in these.”

Tongxin Qian is a journalist at the China Business Network (CBNTV) with many years of working experience. She works for CBNTV’s prime evening international news, where she manages her own team. “This journey means both adventure and learning for me.” View all posts by Tongxin - China