Before I got on the plane, I was looking for Finnish music to listen to. Then I came across Haluun takas mun perhoset without much reason, but I already liked it a lot. It promised a nice trip.

When I arrived in Helsinki, one of the first images I remember was the presence of many LGBT flags in many places in the city, for the pride month. I thought it was strong and beautiful.

While meeting my partners, one of the things that surprised me the most was my level of English. I had already heard about a gap in language skills between France and other countries, but here I could feel it.

So I enjoyed being able to vary and exchange in Spanish with Paula or in French with Magdalena, my “safe French place”. It was confusing to be with so many English speakers and to try to understand the quick conversations, mixing different accents. 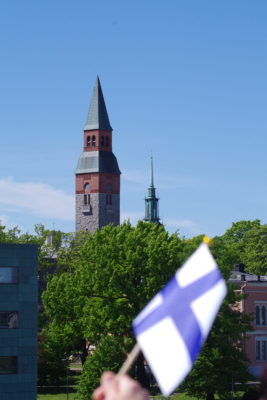 During the stay, I enjoyed chatting with Petra. From her studies in Russia to her diplomatic career, her career is very interesting. But also with Pihla, who was a student like us, and experienced the other side of the mirror. Exchanging views on the Finnish and French conception of melancholy was very enriching. I will remember the Eurovision songs we listened to last night.

We drank so much coffee, to no end, real journalists! Whether it was our first meeting or the breaks during the various political meetings. And when we were dining, I was surprised (without really being surprised) to find almost only French wines at each table.

Moreover, I loved debating with the participants and that we explained the respective polemics of each country. In particular the one on the wearing of the burkini in France. It was enriching to discuss this with Zahra, who enjoyed the sauna as much as I did.

A bit of a Finnish cliché, which is confirmed by the fact that one of my most beautiful memories is the sauna. Whether it is the one in Helsinki, with the salmon soup, or the one in Turku. What a beauty to be able to bathe in the sea, although cold.

I really enjoyed the time with my little American friend Grace, with whom I had a lot of fun. We exchanged our favourite music and it was interesting to see the non-European view of my old continent. 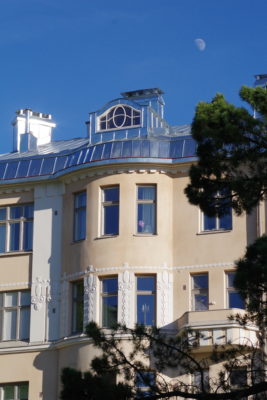 One of the moments that touched me the most was the celebration of 100 years of autonomy of the Åland Islands. The music was so authentic, and to see the flowers and the coloured flags was beautiful. What a pleasure to taste those traditional pancakes!

I remember forever this experience so rich, so special, a condensation of humanity. And now I understand the message of Haluun takas mun perhoset, I want it too.