During the first week of our FCP, I heard about Finland’s clean air, pristine forests, and quiet, civil citizens. It wasn’t just rhetoric though. We saw it.

I loved watching a reality TV show on Finland’s police. It was dull and enlightening at the same time: very few things happened in the 30 minutes that TV crews followed policemen on duty (aside from perhaps a drunkard being, well, drunk). But that was a sign of a courteous, functional society based on trust.

At that point Finland seemed so different from the chaotic, dysfunctional society that I live in, the U.S. Helsinki, (and Finland) was adding up to be the utopia I had imagined it to be, and what it is according to various rankings  –  one of the most liveable places in the world. 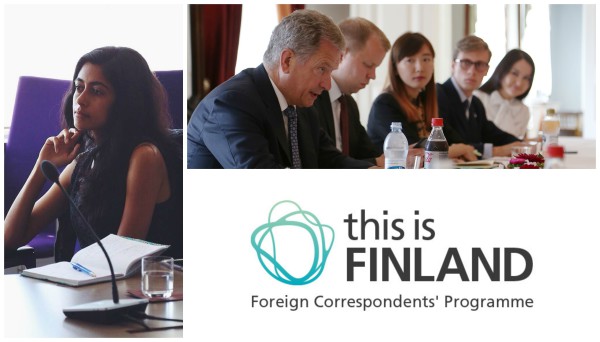 As the weeks passed and our interactions with Finland and its people deepened, we learned about difficulties as well: frustrations with immigrant populations, politicians rallying for homogeneity, economic recession, high housing prices, cyclist deaths, and weakening scores on its famous education system.

This was the bull of our conversations on Thursday as we met with the President,  the Minister for Foreign Trade and Development  and some MPs, and even watched some independent films that highlighted the realities of life in this Nordic paradise.

Finland is a reality, not a utopia. Migration from the countryside to Helsinki in the last 60 years has introduced Finland to the problems of the modern world. Yet, amidst all these bad news, we did hear about solutions and meet some change-makers. That’s what I was most interested in: how can we solve these problems?

This summer, the conversation has centered around the identity of Finns.  The comments made against immigration and multiculturalism hit home to Nasima Razmyar, a Member of Parliament who is of Afghani descent. Given that Finland’s known for its equality, it was surprising to read the hate speech against diversity. Razmyar, however is fighting the hostile statements. She said to us, “Your background shall not determine what you will become. Equality benefits everyone.” It was an intrinsically Finnish response.

Once Parliament convenes in September, Razmyar wants to make this a primary talking point. “I don’t want people to just forget all that has been said,” she noted.

As the country grows, and Helsinki’s population increases, these are hard realities that Finland will need to address, and rightly so, if it wants to mature.

Aside from social turmoil, we heard repeatedly about Finland’s weakening economy — a sign of the larger problems in Europe and its aging population. Yet, the Minister for Foreign Trade and Development Lenita Toivakka offered a solution:  Team Finland. A concept that’s now been adopted also by Sweden and Estonia will put Finnish companies in the spotlight. Startups, entrepreneurs, and struggling businesses can call a central number where their questions and concerns will be answered. And a human being will answer the call, not a machine, according to Petra Theman, Director of Public Diplomacy of the Ministry for Foreign Affairs.

Moreover, Minister Toivakka talked about dedicated missions to countries to highlight what Finland excels in, such as cleantech. Over one-third of public funding goes into cleantech in Finland and, in 2013, the industry reported a turnover of over EUR 25 million. Without fossil fuels (like its Norwegian neighbour) and a cold climate (that demands energy), Finland has become a center of innovation in renewable energy sources. Now, by exporting that knowledge, Finland’s cleantech industry could help the country out of its economic woes.

Meeting politicians can be a frustrating encounter for a journalist: they’re often diplomatic, and uneventful. But, I was delighted by the honesty and openness of Pekka Haavisto and Nasima Razmyar, two MPs, who acknowledged that Finland was going through a difficult period. Minister Toivakka also didn’t shy away from the elephant in the room: over 40% cuts in development spending.

Despite these hurdles, Finland still appears, to me, as a progressive, inventive society. And that’s the image I’ll take home with me to the States.

Photos: Mohammed Alfaraj and Office of the President of the Republic of Finland

Esha Chhabra comes from California, and contributes to Forbes.com. In addition, she does freelance work for the New York Times and the Guardian. Esha focuses on social innovation and thinks highly of Finnish innovation achievements in different fields. She is passionate about learning more about Finnish culture, design and aesthetics – and how they could be weaved into the lifestyle of the United States. View all posts by Esha - USA