My interview day was the most awaited part of the whole FCP programme. You may be surprised because while some of the FCP participants interviewed energetic business leaders from, for example, Kone and Nokia, I had meetings with very punctual and reserved people from the Finnish Government. Since the beginning of the conflict in Ukraine in 2014, Russia and Finland have had to adjust their relations to the new political and security situation in this part of the world. My aim was to get first-hand information about how high-ranking Finnish officials perceive the future development of the current situation and to get their opinions on the concept of “hybrid war”. 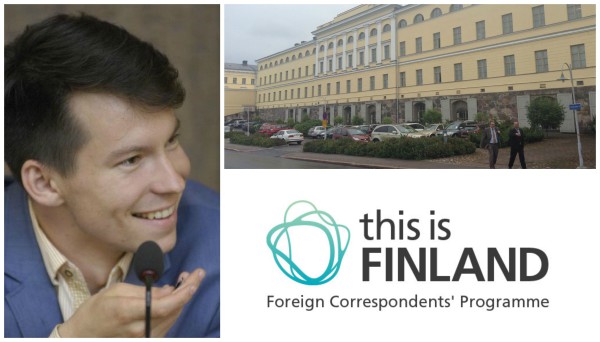 I may say there was a special “Eastern European” series of interviews arranged for me as well as for Yana Prussakova and Oleksandr Guzenko from Ukraine. The start of the rainy day was promising with an appointment at the  Ministry of Defence. At 9 o’clock sharp we shaked hands with Minister Jussi Niinistö. He was ready to face really tough questions regarding deployment of Finnish military forces, restrictions to Russian landowners in strategic areas in Finland, and recent airspace violations. After this interview we understood that high-ranking officials in Finland are always ready to answer difficult questions but also know very well how to keep secrets. So we may definitely say that unfortunately for us but hopefully for Finland no military secrets were revealed during the 30-minute session of questions and answers.

Of course my impressions are not based only on the interview. I was surprised that not many employees wear military uniforms in the Ministry. And even one or two of them arrived to work by bicycle. The building of the Ministry of Defense is worth visiting – if you would like to compare administrative buildings in different countries. You can’t find any armed guards at the entrance and there are not any military equipment in the public areas.

Our next destination was the Department for Communications of the Ministry for Foreign Affairs where we had a great chance to discuss Finland’s information policy in the very tricky situation of the so-called “hybrid war”. Director General of the Department Jouni Mölsä has an impressive media background as a journalist before he joined the diplomatic service. Mr Mölsä told us how he deals with misinformation and mistakes that may be found in Russian media and commented on the poor credibility of Finnish citizen Johan Bäckman, who is often cited by our colleagues in Russia.

One of the most intriguing questions for journalists from all over the world is how Finland stays calm despite “tectonic” political and economic changes in Russia, the closest eastern neighbor. We found out that there is a special group of advisors and specialists who deal with the former USSR region. We were lucky to meet Mr Kalle Kankaanpää from the Ministry’s Department for Russia, Eastern Europe and Central Asia. He and his colleagues now monitor the Ukraine crisis and the situation in Russia after the sanctions were issued. At the end of the interview day I went to visit the Aleksanteri Institute on my own. It is a well-known center for Russian and Eastern European studies. I met professor Markku Kangaspuro, Director of Research, to get an independent academic point of view on the current affairs. He told me that there are no winners in the current security situation: Russia, Finland as well as the other neighboring countries should be deeply interested in developments in the Baltic Sea region, but not in building fences and barriers on the borders.

Artem Filatov is a freelance correspondent based in St. Petersburg, Russia. He knows Finland well and has visited the country several times before. “For me Finland is the most interesting Nordic country with great examples of design, innovations and an eco-friendly way of life. It has clean lakes, unique landscapes and modern education – very inspiring.” View all posts by Artem - Russia