What a day was yesterday! During the FCP every day something new and unexpected happens. The programme is so dense that it feels as if we arrived here many days ago already, but in fact Wednesday was only the third day of our stay here. 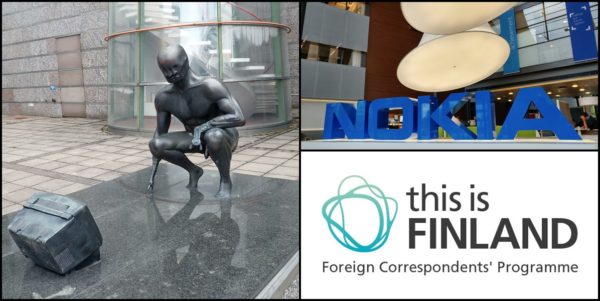 In addition to the common meetings, we also started to work on our individual assignments. I remember in 1998 one of the several striking moments was to interview the most known Finnish writer abroad, Arto Paasilinna, in his home in Espoo.

In such an interesting group of journalists like ours, each of us is investigating about different aspects of Finnish society: the situation of the immigrants, the relationship with Russia, interviews with other local writers, the rise of populism in the country, the present situation of education in Finland, etc.

Personally, I chose two topics somehow connected, but the organisers had to squeeze my interviews before and after the interesting meetings we had yesterday. We first had an interview with Finnish Foreign Minister (and some of us were very much waiting for that moment). Later on we visited Yle, the Finnish national broadcaster (especially interesting was to listen to Mika Rahkonen, the leader of the News Media Lab and Development team there).

Early in the morning, I took a tram to Finpro, a public company which promotes foreign direct investment to Finland, but it also provides support to Finnish small- and medium-sized enterprises to propose their expertise abroad.

Among the many projects they have there is also the “Mobility as Service Programme”, which tries to develop the world’s first open innovation platform for mobility services. On one hand this applies to door-to-door mobility services, but it also provides pioneer innovation solutions in the automotive field.

However, it was striking to know that Mikko Koskue, one of the leaders of the group and the person I was interviewing, in his previous life was a professional handball player in Italy.

After the visit to Yle in the afternoon I had the second interview, this time in Espoo.

I remember that during my experience in the YJP in 1998 we visited Nokia Talo, the stylish new house of what was at that time one of the most important companies in the world. Actually, paradoxically Finland was probably less known than Nokia then, a quite different situation from now.

I was interested in the dramatic changes such a firm has gone through during all these years, from being the mobile world-leading brand to a deep crisis which affects indirectly also the Finnish business environment.

An interesting part of the story is about how now the corporation managed to reinvent itself into a new dimension, less known to the general public but still a leader in some fields (such the research on the 5G development), with a more diversified portfolio but at the same time a more focused approach.

However, more surprises were waiting for me.

The person working in the press office told me that when the email containing the interview request with my name arrived to the media department, one of her colleagues had a gasp. He is a Canadian guy who, before joining Nokia, was previously a journalist. Believe it or not, we had met each other in a programme about Finnish culture in 1996 and practically since then we had not been in touch anymore! Unbelievable.

Again, Finland created the chance for another unexpected meeting!

Alessandro has worked for over 20 years as a freelance journalist reporting to publications and radio channels of 15 countries with 10 languages focusing on international politics, conflicts, European relations, minority questions and culture. He has also worked 15 years as an electoral observer and press officer. Alessandro participated in the programme 1998. After that he has visited Finland few times on his free time. After FCP programme, he published many reportages about Finland, and has also considered writing a book about Finland. He is interested in Nordic perspective to the global and European Union crisis, Finland’s relations with Russia and how Nokia has changed over the years. “I really love Finland, a country not so many people would know about. The local nature, the extreme position and climate, the subtle and peculiar humor of most Finns, for sure a different perspective about many aspects of life, which enriched me enormously.” View all posts by Alessandro Gori