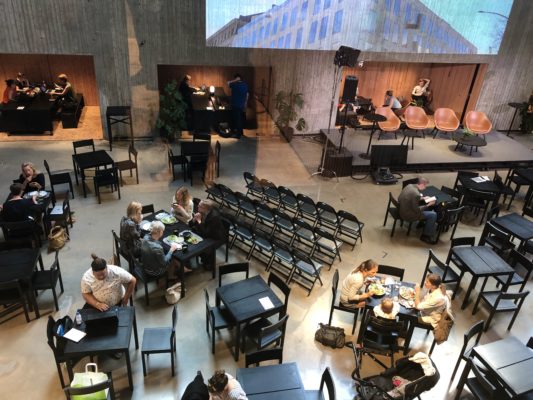 Starting 2010 I’ve travelled to Finland several times and constantly kept an eye on its way forward. Meanwhile I’ve lived and worked abroad and somehow convinced myself that my home country Romania is on its right track itself – moving slowly, but it would eventually get there.

Never in the past years have I experienced such a dire feeling that, maybe, it won’t, than when I got back from Helsinki in June. That we are not doing enough, that I am not doing enough myself or that when we will eventually get “there”, it might be too late – climate change will have killed life on Earth.

It’s been two months and I can still feel the “I’ve come back from the future” feeling. Not necessarily a very technologized future, with robots taking over, and driverless electric buses (which, by the way, are being tested in Espoo), but one where trust in one another and in public authorities prevails, where nothing is lost, but is transformed: soon-to-expire vegetables into delicious soup, old mental hospitals into hip restaurants, old harbour-administrative buildings into swimming pools and gyms for the newly built school across the street. Finns’ very pragmatic skills for efficiency and sisu run the place.

Some of the things that impressed me the most are, probably, the least impressive in ten other Westerns’ eyes – simply because they are ordinary. One was the Think Corner at the University of Helsinki – a very modular study and events area open and free to anyone, literally anyone, where you just pop in and are can use the facilities, with no one asking any questions. They’ve been open for almost two years and last year alone they had over 600,000 users/visitors (Helsinki itself is a city of 600,000 people).

The other thing that stuck with me is Oodi Central Library, somehow, a gift to the city at Finland’s centennial celebration in 2017. After a thorough public consultation to come up with the design and main purposes, the construction costed exactly EUR 100 million and managed to stay within budget and deadline. It’s one of the 37 (!) libraries in Helsinki and the two neighbouring cities of Espoo and Vantaa, where you can not only loan books for free, no matter your age and status, but you can use – for free – the many working spaces, ranging from recording studios, video editing suites, to 3D printers. In just two six months, over two million people visited or used Oodi Library.

I kept comparing Oodi with the many useless and over-the-budget projects that Romania did last year, when it celebrated its centennial: insignificant concerts and events across the country, that you forgot about as soon as they were over. Nothing that would stay the next day, no investment for the future.

These two projects impressed me so much because they show what Finland is about: openness, trust and equal opportunities, that I believe form the crucial basis for any sustainable and responsible future, run by robots or not.

Sorana Stănescu is a participant of FCP 2010 an she’s a long-form magazine writer for the independent quarterly magazine Decât o Revistă (DoR), and a current affairs TV reporter. She was a senior journalist with the Romanian public television (TVR) for eight years. Since 2016 she’s been covering extensively the fields of education and social equality for DoR, and has been coordinating DoR Live, a series of live storytelling events. She has been a contributor to BBC TV’s flagship investigative programme Panorama and to several other British and Romanian media. In 2012 Sorana won the first prize in the Balkan Fellowship for Journalistic Excellence competition, with an investigation on the UK job restrictions. The same piece won the Reporting Europe Prize in 2013, an annual prize honouring excellence in English-language journalism, awarded by UACES – the academic association for Contemporary European Studies in the UK. Since the programme she has covered Finnish education system extensively in DoR. She says that Finland has become her go-to place when she wants to do research about best practices for stories related to energy, transport and environment. View all posts by Sorana - Romania