After lectures and learning about Finland for two weeks, the days that everybody had been waiting for were finally here: ‘Finnish Media Working Day’.  Being a journalist in the one and only financial newspaper (Dünya) in Turkey, it was no surprise for me that my working day was at Kauppalehti, which is the leading financial newspaper in Finland. 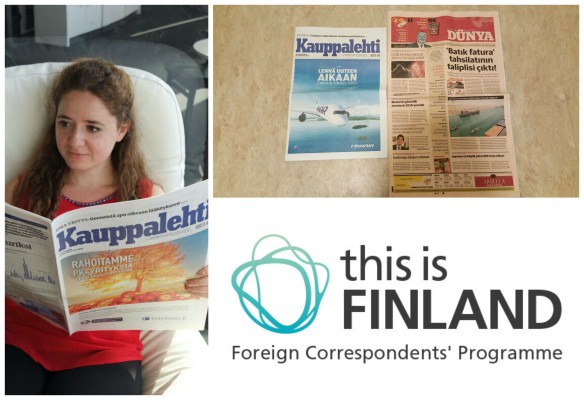 Kauppalehti, established in 1898, is the biggest brand of Alma Media. “Kauppa” means ‘trade’ and “Lehti” means newspaper. Kauppalehti has 25,000 subscribers, including the digital readers. When you look at the reader profile of the newspaper, you see that 68 percent of the readers are men. Of the 40 journalists, correspondents and news editors in the newsroom, however, half are women.

The facilities that are provided for the journalists are really fine and when you talk to the Kauppalehti staff, they are very pleased to be working under this brand.  I have to admit that it was quite shocking for me to see such a silent newsroom. It was a great place to work at, but it was very different from what we have in my country. In Turkey, we usually have discussions about the articles and breaking news all the time; there is always some noise in the room.

On our first day at Kauppalehti, editors gave us some topics to write about. In my article, which is going to be published next week in Finnish, I tried to explain how Turkey is one of the most visited tourist destinations and what Finland could do in order to attract more foreign visitors. In Turkey, we give importance to branding in all fields, also in tourism. There are some incentives provided by the Government to encourage investments in the tourism sector. With the policies and promotions that are being run by the Ministry of Culture and Tourism, the number of foreign visitors has got higher in the recent years.

As I pointed out in my column, I think Finland does not put much effort on worldwide promotion. I believe that Finland has so many features to share with the world. For instance, when I told someone in Turkey that I was going to Finland with FCP2015, many people underlined that Finland was on the top of their lists to visit. Finland could use such brands as ‘Lapland’, ‘Northern Lights’ and ‘winter tourism’ to attract more foreign visitors.

Another point is that in Finland tourism issues are handled under the Ministry of Employment and the Economy. It may be not easy but I suggested that issues dealing with  tourism should be managed separately under a ministry of tourism.

It was a great experience to work as a journalist in the country that is worldwide known for the freedom of the press. I enjoyed every minute of it and I am going to bring home everything I learned in Finland.

Özüm Örs is a journalist at Dünya, Turkey’s leading financial newspaper, with several years of experience. She works as an economic correspondent, focusing on technology and innovation. Özüm is very interested in Finnish nature and Finland’s education system. View all posts by Özüm - Turkey

One thought on “Being a journalist in Finland, the land that is known worldwide for its press freedom”